Skip to content
Home/On the Boards/The Ordinance House: Restoration and Repurposing of an 1890’s Industrial Building

On idyllic Sullivan’s Island, where the recent trend in home sizes could be perceived as bigger is better and more is, well, more, we are swimming against that current with our modest-sized, but filled with character, Ordinance House project–a restoration and repurposing of an old 1890’s industrial building.

The History of the Ordinance House

This project is a thoughtful preservation and restoration at 1730 Thompson Avenue of an 1890’s Ordinance House, originally part of Fort Moultrie military complex. This small brick building, built some time in the 1890’s, originally had a simple gable roof, a row of arched windows along the front façade and large garage door openings at each end and at the rear. October 1908 Map of Fort Moultrie. The Ordinance House was located behind the Junior Officers Houses and adjacent to Stables.

Some time before 1908, a large shed roof was added to the rear, which was then enclosed with exterior walls by 1930. It is probably about this time that Fort Moultrie repurposed the Ordinance Building into a garage/machine shop. 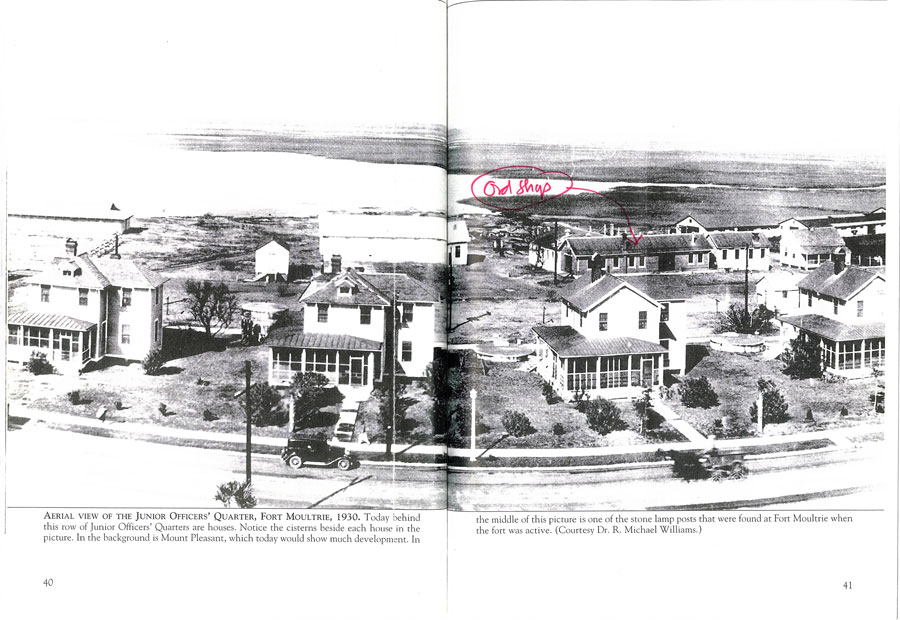 1930’s Photo of the Junior Officers House with the Ordinance House visible on the right. Photo courtesy of Dr. R. Michael Williams.

When the Fort was deactivated in 1947, most of the properties, including this one, were sold to private individuals. Mr. and Mrs. Anderegg bought this building in 1951 for approximately $15,000. At that time, the 60+ year old empty industrial building had no interior rooms or partitions. Mr. Anderegg, a contractor, began the first renovations and built a small apartment, Unit A, for his family at the far end of original Ordinance Building. Like many island residents he scavenged materials from the other sites and some of the old Army service station was re-used in his apartment.

Mr. Anderegg later constructed Unit B beside the family’s apartment, which was used as the workspace and materials storage for his business. As the family grew, Mr. Aneregg expanded the family’s living quarters into Unit C, which was the last conversion and extended back into the original rear shed. This was when he removed the 2 sets of huge double sliding doors on rollers on the rear of the original brick ordinance building.

In 1989, Hurricane Hugo flooded the home with 5 ft of water. Mr. Anderegg, now mayor of Sullivan’s Island and with many responsibilities to the Town in the wake of the hurricane, decided he’d fix his damaged homestead himself. He contracted out some of the work, but the bulk of the work was done on his own. It was also at this time the slate & metal roofs were replaced with asphalt shingles.

Over the years, the Andereggs steadily made other interior and exterior changes but the biggest exterior change happened in 2002, when vinyl siding, soffits and fascia were added and when the windows were replaced with vinyl windows. These changes completely hid all of the materials and architectural details of the original Fort Moultrie Ordinance Shed. Circa 2002, covering the historic brick with vinyl and replacing the original windows with vinyl windows.

The 3 units built by Mr. Anderegg remained as residential units until 2017, when the property was sold.

The National Register of Historic Places added the Fort Moultrie maintenance complex, which includes the Ordinance Building, to the register in 2007.

Read part two of this blog: The Ordinance House: How It Came to be Restored