Renovation and Re-imaging of an Historic Structure

Tucked away on Sullivan’s Island’s on Thompson Street was a small gem waiting to be uncovered and restored. Hidden under a layer of vinyl siding and almost dwarfed by a rear addition, was a small brick building with a simple gable roof that back in the 1890’s was used as an Ordinance Shop for Fort Moultrie. Like many of the Fort’s buildings it was sold after the Fort was decommissioned and it was then converted to residential use. When we started this project, it was hard to imagine the building’s long and significant history.  But when we climbed into the attic and saw the top of the old brick walls with the original arched window openings and old wood roof trusses, we knew we’d discovered something special.

As you approach the home, the gable roof is now covered with a very traditional hand-made leaded copper metal roof.  A subtle shed-roofline creates a new front porch.  A dark wood-stained front door with extra wide sidelights welcomes you in.  On the front of the home we were limited to the location of the original windows, so having so much glass on the front door was a way to bring additional light into the interior. A large open plan living area is just on the other side of the door.  Inside, the peak of the gable is now exposed, as are the existing roof beams and roof framing– both stained a deep brown. The original wood roof boards are hidden behind the insulation but the new wood ceiling recreates that look, bringing depth and warmth to the larger interior volume. Strategically placed lighting highlights the details of the ceiling and provides additional light in the home. The exposed HVAC ducts are symmetrically laid out and are disguised in the ceiling by painting them the same color as the kitchen cabinetry to minimize their appearance. The proportions of the large room leave enough space for a well appointed kitchen, eat-in-area, as well as a comfortable seating area. The kitchen is high-end, yet streamlined with dark, navy blue painted cabinets, a backsplash with white, large-format tile laid in a railroad pattern, and white quartz counters with muted veining.  The exposed brick walls of the space resonate with the history of this building. 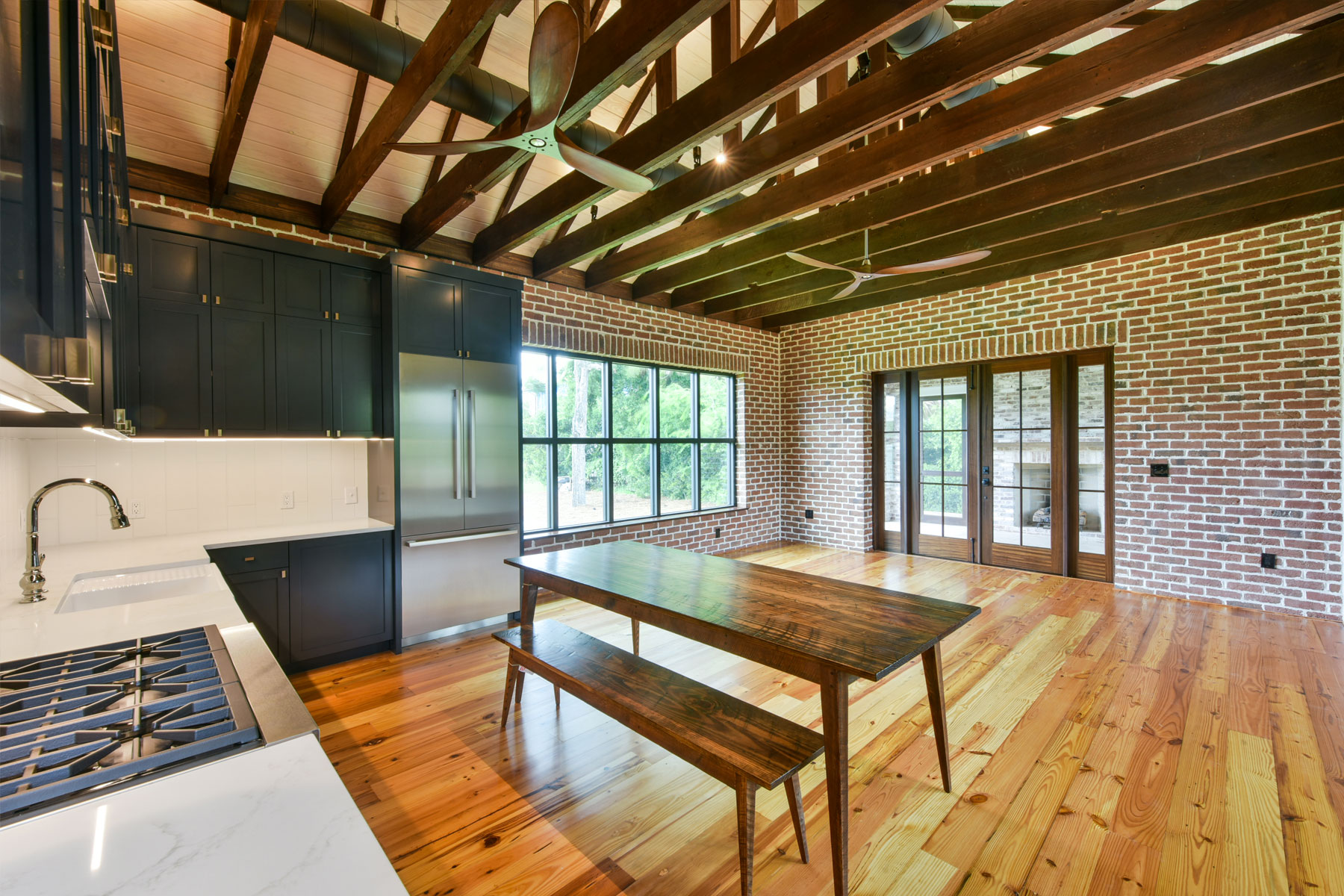 Just past the kitchen down the hallway with walls of exposed brick, you will find the sleeping quarters and the bathroom.  The tile floor in the bathroom is reminiscent of an 1890’s tile pattern, but with a modern flare that compliments the dark gray painted vanity.  In the shower, we utilized the same large format white tile from the kitchen backsplash, but this time ran it in a brick pattern.  The 10-foot tall walls of the shower are tiled all the way to the ceiling.  On the backside of the shower is a doorway that leads to a private patio.  On this patio is a hammered copper soaking tub.  Discreetly placed, the tub can be used during the warmer days on Sullivan’s Island to relax and enjoy the ocean breeze.  The patio is also accessible from the master bedroom.  In the master, we repeated the same ceiling design as in the living area and in the sunroom at the opposite end of the home. As you look down the hallway from the bedrooms back to the living area, you’ll notice that we ran the same rafter beams to create symmetry throughout the home.  The space was also unified with a consistent wide plank, heart pine wood floor used throughout.

At the opposite end of the home, just off the living area is the screened porch. The front wall has windows in the original opening so the integrity of the front elevation is maintained. The center of the room is a gas fireplace that is flanked by hand made screen doors that lead to the outside. In this room you are able to see the original brick detail of the home including the arched brick openings we discovered. We replicated the ceiling design used in the other areas of the home in this space as well. A large screened opening at the rear of the space provides a view to the ocean and a planned future home site. The restoration of the Fort Moultrie 1890’s Ordinance Shop was only the first phase of this project. With this phase completed, we will now move on to the design of a new home on the back of the lot. Once that is completed, this historic building will be used as a guest house for the primary residence, which will be the new construction home. After we received Conceptual and then Preliminary Approval from Sullivan’s Design Review Board (DRB)  for the renovation of the old Ordinance Shop. We asked for permission to demolish the rear addition so the original shop building could become a small residential unit (a special exception allowed under Sullivan’s zoning ordinance to encourage the adaptive reuse and preservation of these historic buildings). But this was not an easy ask and the Board took it’s time to review our design, debate amongst themselves how much change to the original building was acceptable as an adaptive reuse, and consider whether the rear addition had any merit in it’s own right and should be incorporated into the design.  These issues were complex and will also need to be debated and discussed when the old Town Hall buildings are renovated and adapted to residential use.

In the end, the DRB gave us unanimous approval to demolish the rear addition as it did not have significant merit in it’s own right.  They approved a new porch on the front, as well as large storefront style windows and shed dormers in the roof at the rear. While the process took a few months, in the end I think everyone felt satisfied with the balance between preserving the historic fabric and accommodating residential use on this unusual site. The conversion of this once military building into a private residential home had many steps to it.  We chronicled our journey through the Sullivan’s Island DRB, as well as what happened along way the during demolition and reconstruction phases.  We set out to respect the building’s historic roots, but to revitalize the interior for a new purpose as a guest house.  If you want to read more about this project, please see our blog below.

The Ordinance House: What Happens When You Start Renovation of an Historic Building

The exciting part of restoring an historic structure and converting it into a residential home is the details you uncover during demolition. Finally years of layers and revisions and changes are peeled back to reveal [...]

The Ordinance House: How It Came to be Restored

Journey with us in part two of our series about the restoration of the Fort Moultrie Ordinance House.  From zoning changes to DRB reviews and approvals, learn about how we navigated the design challenges of [...]

On idyllic Sullivan’s Island, where the recent trend in home sizes could be perceived as bigger is better and more is, well, more, we are swimming against that current with our modest-sized, but filled with [...]

Demolition is underway at the Fort Moultrie 1890’s Ordinance House project. Removal of the interior walls and finishes always reveals hidden gems. In this Sullivan's Island project to convert the former Ordinance Shop into a residential property, we see remnants of a past era and previous renovations.

Swallowtail Architecture of Summerville has BZA approval to classify a Fort Moultrie building dating back to the 1800s as a 'Special Exception.' The Sullivan Island project, one of Swallowtail’s three current Lowcountry historic renovations.

PRESS RELEASE FOR IMMEDIATE RELEASE Recently obtained from the Atlanta Archives, this richly detailed copy of the map of Fort Moultrie shows considerable detail and information about the Fort. Sullivan’s Island, South Carolina; [...]